"There is a heart for beauty," and our ancestors have always loved jade. Appreciating jade is a noble hobby. Our ancestors recognized the hardness and beauty of jade as early as 5,000 BC. Jade can not only be used to grind tools, weapons, but also beautiful decorative objects, bearing people's artistic feelings and spiritual pursuits, and It is also used as a ritual to sacrifice ancestors. Therefore, at the beginning of Chinese jade, it has a mysterious color and evil spirits, which symbolizes the role of power, wealth, and nobles.

During the Spring and Autumn Period and the Warring States Period, Confucian scholars combined ritual studies with jade and used jade to embody ritual thoughts. In order to adapt to the ruler's love of jade, the traditional characteristics of Confucianism, such as benevolence, wisdom, righteousness, ritual, music, loyalty, faith, heaven, earth, and morality, are attached to the various characteristics of jade physicochemical properties. "The gentleman is better than the jade", and the doctrines of jade, five virtues, nine virtues, and eleven virtues came into being.

However, at that time, the processing technology was very primitive. The only people who wore jade were the nobles of the palace and the nobles, but the real rumors spread to the people after the Song Dynasty. At that time, there was a custom in the folks, that is, when a pair of young men and women married, the grandmother took out layers of jade bracelets from red silk and put them on for the newcomers, wishing the newcomers a harmonious life, and after a few years One day, this scene is back again. This tradition reflects the unique and immortal nature of jade, which preserves the essence of ancient Chinese culture and art.

At the time of the transition, the special and unique qualities of jade have long been rooted in China.

In the hearts of people Chongyu and Aiyu, jade represents beauty, dignity, perseverance and immortality. "Humble and gentleman, Wenrun Ruyu", while possessing jade, also cultivated his own sentiments and deepened his own soul. Emerald pop

Legend has it that at the beginning of the thirteenth century, a salt merchant in Yunnan accidentally took a stone from Myanmar and returned to China. The crystal clear green stone suddenly conquered the Chinese of Aiyu. This stone is jade, because of its bright color and production. It is rare, has a glass luster, moisturizing texture, strong toughness and high hardness. It is called "hard jade" in the jade family, also known as "the king of jade".

Most of the jadeite origins belong to the undeveloped mountainous areas. Although they are not ghosts, wolves and tigers, but Mengyin and Shenshan often go to the sun for a day, and the forests and the seas only ask for the small hairs that the jade people walk out; the fog and the river are turbid. Every summer thunderstorm, the water is everywhere, the smoke is smoldering, the smoke is three feet high, that is, the gathering is not scattered, people are in the boat, reaching out and not seeing the five fingers, such as into the Wuli fog. In addition to the smog and suffocation, mosquitoes and malaria, the environment is bad, plus the original tools, short dry season, lack of materials, jade mining, extremely difficult.

Until the 18th century, with the advancement of technology, Jadeite really entered China's Yunnan. Although jade is only 300 to 400 years from the introduction to the application, but because of the magical cultural connotation of people who love jade, its short and glorious history is sufficient.

In order to envy other jade, and together with other jade constitute a long-standing jade culture of the Chinese nation. In the Ming Dynasty, Burmese jade appeared in China; in the Qing Dynasty, because of the love of the princes and nobles (especially by the Emperor Qianlong of the Qing Dynasty and the love of the Empress Dowager Cixi), it was called "Royal Jade", and the jade was worth a hundred times and became the best in Yuzhong. . Emerald is closely related to people's lives. In the eyes of people, it is not only a beautiful stone, but also with mysterious beliefs and attachments. Both the ancients and todayadays love jade, jade, and jade. "The gentleman has no reason, and jade does not leave." Nowadays, it has become the most popular jade in the world of the Yellow Emperor and South Korea. Peiyu Aiyu has become a modern fashion. 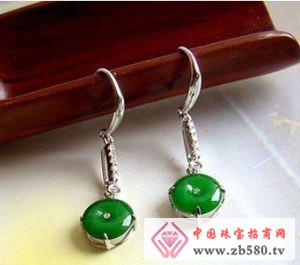 Jade, its English name is called Jadeite. From Spanish PridraYiada, meaning a gemstone worn at the waist, because in the sixteenth century jade is considered a gem that can cure low back pain and kidney pain. In ancient China, "ç¿¡" and "ç¿ " were used to refer to the red feather bird and the green feather bird (according to Xu Shen's "Speaking Words" in the Eastern Han Dynasty).

Jadeite, whose main mineral is called jadeite, is a kind of basic pyroxene in monoclinic pyroxene. It is a dense aggregate composed of numerous fine fibrous microcrystals, which has a felt-like structure. Basic physical properties: high toughness, can withstand high impact force and pressure; Mohs hardness 6~7, greater than the Mohs hardness of nephrite. Because the jadeite has an orange peel effect after polishing; it sinks in diiodomethane; its luster is glass luster to grease luster; transparency is transparent to opaque; the fracture is jagged, darker than the surface.

The world famous high quality jade jade is produced in Myanmar. Its deposit is located in the tributary of the Chin Dun River in the Wulong River in northern Myanmar. The main producing areas are the volcanic, Burma, Pan and Nan Nai, which are close to the Yunnan border. Tengchong and Dali in Yunnan were once the jade and jade distribution center and have been replaced by Ruili. Ruili's jade market is the most prosperous and representative market in China's jade trading market. There are all kinds of high, medium and low-end goods. It also contains some B and C goods, which is necessary to test the eye of the buyer. In addition to Myanmar, Thailand, the United States, Japan, the former Soviet Union and China, there are jadeite minerals, but Myanmar is the only country that produces quality goods.

The reserves of jadeite are very limited. The world's high-end jade origin is limited to a small area in northern Myanmar, far less than diamonds and other treasures. According to some statistics, from the end of the Qing Dynasty to 1949, the "King of the Jade" emerald rose more than 200 times, especially in high-grade jade. In the Hong Kong market, 100,000 Hong Kong dollars is a very common thing. It is not uncommon for a few million or even tens of millions of Hong Kong dollars to be auctioned at the auction house.

The emerald market is not volatile, and it has risen thousands of times from the 1970s to the end of the 1980s. For a time, all the jadeites were busy looking for goods, and the situation of being in short supply made the jade people work day and night. The economic crisis in the 1990s caused a slight correction in the price of jadeite. However, the price of jade raw materials has risen sharply in the past two years. The reason is that high-grade raw materials are scarce, and the miners can live in odd goods and are not eager to sell goods. Many experts lament that "the flour is more expensive than the bread." Therefore, it can be said that it is time to buy Cui. The rise in the 1980s was due to the economic take-off in Taiwan, Hong Kong, and Southeast Asia, and the next peak will come with the development of the domestic economy. There is reason to believe that this peak will rise more than the previous round. At present, even the $1,200 jadeite has potential for appreciation, while high-end goods are not affected by the decline in the market.

Looking at the trend of high-quality jade in recent years, the overall demand is still increasing, the price is getting higher and higher, and the point is a bit high, but the popularity of people is still increasing. At present, the highest record of the jade egg noodle ring was created in 1997 with a price of HK$ 7.59 million: the highest record of the bracelet is a crystal clear and exquisite bracelet sold in 1995. The transaction price is 12.12 million Hong Kong dollars, which shows people are obsessed with the emerald. The degree of madness.

Collection jade needs to pay attention to the fact that B goods (referred to as jade after acid treatment), only A goods can be preserved, so be sure to ask if it is A goods when purchasing, and ask the seller for a certificate.

The Button Badge, Pin Badge, are the ideal promotional products for your latest marketing incentive or product launch and are the perfect way to raise awareness and generate much-needed funds for your charity or club. tinplate badges, photo badges are also a fun and inexpensive way to market your company or brand. Badges are also great to hand out at children's birthday parties or school fundraisers.

Pin badge, is available in a oval badge, rectangle badge and circle badges. All artwork if the badges is printed via a digital four colour process assuring a professional finish and faithful colour reproduction. The artwork is crimped to the badge casing and sealed with top quality mylar plastic coverings to ensure a hard wearing long lasting badge product. Our badges come in different sizes, We have a  bespoke range of  Enamel Pin Badge, Magnetic badges, Printing Pin Badge.