In the summer of 2013, Coca-Cola launched a new packaging, the Happy Bottle, which is undoubtedly the most talked about and hotly discussed marketing case this summer. The newly-packaged â€œgirlfriend, oxygen beauty, comet star, Bai Fumei, natural stay...â€ to cater to the younger consumer group's â€œsellingâ€ and â€œfunâ€ behavioral characteristics after the 90s, but there was an unusual bottle of nicknames. All sorts of speculation by industry professionals, "The girl next door," is impressively on the list. This fashion brand with a large number of leading positions in the mainland has joined forces with Coke Great. The girl next door is also playing cross-border? Let's guess boldly: 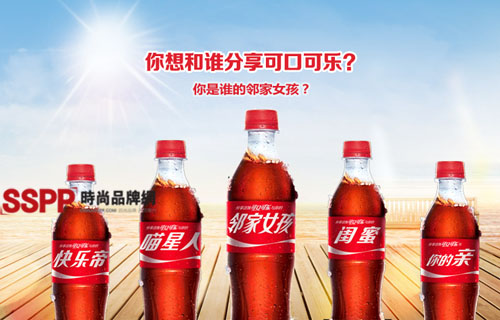 1, next door girl, affinity and fashion <br> Coca-Cola Greater China interactive marketing director Chen Huiling once said, "Young people's daily communication language, often see 'eating goods' 'oxygen beauty' 'comet stars'' next door girl This kind of phrase, it is already difficult to distinguish whether this is a network language or a daily culture. So, before launching the market, we used scientific methods to rigorously do consumer-wide listening and analysis to select consumer habits and preferences. Social language, combined with the concept of brand and company, implements the happy nickname that can finally be bottled.â€ That being said, the brand name of the girl next door is even better than others, and the brand name has already been integrated into indistinguishable everyday language and daily culture. As a matter of fact, "The Girl Next Door" is a friendly and stylish person. Coca-Cola and the girl company next door join hands and cross the border. It also fits the brand philosophy of the two companies and the young consumers who are facing the same. It is also reasonable to choose the "Neighbor Girl". in?

2, interactive marketing, more successful cross-border <br> According to Chen Huiling revealed that the promotion campaign of Happy Nickname bottles has spent a lot of time in the early stage to make adequate preparations, this time they will also cooperate with brands in many different industries to promote . In July, with the Renren.com online to host the Alumni Association, the event just started, it attracted the participation of nearly 50,000 users. On Sina Weibo, the "nickname bottle" customization activities began five minutes, the popularity of popping Make Coca-Cola's ordering system on Sina Weibo once collapsed. In August, the neighbor girl Cola nicked that the bottle set off a new storm in the terminal stores of the girl next door. There were Coke pictures of â€œCoca Cola, Love the Girl Next Doorâ€ everywhere, and the microcosm sent to Coke, shopping sent limited edition fashion T-shirts, and special features. The on-site activities attracted numerous crowds, and the popularity index of girls next door soared rapidly. This has caused widespread concern and repercussions in the fashion apparel industry. This kind of cross-border cooperation and interactive marketing are more successful?

3, playing and sharing cards, coincidentally
Maybe it was the challenge of Pepsi's "aspiration for the present" to be young and limitless. This time Coke played "sharing" and shared this bottle of Coke with your "neighboring girl". The concept of "sharing" is better and closer. The young group has a great feeling of joy. Similarly, the local girls who occupy the high ground in the second and third tier markets are the girls next door. They are mainly female consumer groups after the 85s and 90s. They launch 5000-6000 styles each year. Their style is fresh and trendy, and they are very young. The love of the consumer group, the girl next door insisted on advocating the brand concept of â€œsharing good and movingâ€. This concept is exactly the same as the â€œsharingâ€ with Coke the Great, â€œevery warlord, to Zhenghe and Qishengâ€. This girl's game was ignited in nearly 700 stores in the terminal. She joined hands with Coca-Cola to share the interaction and make her way to wherever she went. When it was midsummer, â€œIcy girl next door to Coke, careful hot mouthâ€ put the weather heat wave into a good wave, let the two brands in the wave of the harvest of consumer favorability and reputation of the brand, can be described as multiple purposes , Coca-Cola and the girl next door, a new model of cross-border?